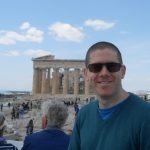 Owen is an historian of warfare, society, and the pre-modern world more generally. His specific research interest lies in the transition of soldiers from civilian life to the battlefield and back again, including all the psychological and sociological problems that arise from this. Most recently he is working on the concept of post-traumatic stress disorder (PTSD) and how it can, or cannot, be used in Ancient History. More broadly, he specialises in the ancient Greek world and its wide array of cultures.

Owen works as both a lecturer and as a freelance writer, regularly contributing to publications specializing in ancient and medieval history. He has published two books on the topic of ancient Greek warfare: Great Battles of the Classical Greek World, and Great Naval Battles of the Ancient Greek World.

Whilst the academic pursuit of history is a fun challenge, Owen is most content when he is popularizing the ancient and medieval worlds for people new to the topic. He loves bringing to life the sounds, smells, colours and characters from the dusty pages of the past and sharing them with more and more people.