As we join our bedraggled travellers today we learn that a castle that does not look like a castle can still be a castle, there exists a place in Ireland where the pubs don’t sell real ale and historical periods can sometimes be a loose concept to some! 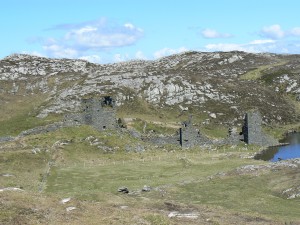 “We found it! After searching high & low we found Dunlough Castle – if castle is even the right word. Ali + I disagree on this one; it is a wall with towers – that, to me, is not a castle but Ali disagreed. Something to do with definitions, I don’t know.

The ‘castle’ was amazing, set in the craggy cliffs of JRR Tolkien’s imagination. The coastal road down is a sight to behold especially in the blazon sun we witnessed. Dunlough is situated on grazing farm land and is a bugger to get to. Especially as there are no signs nor directions! Welcome to Ireland. It is drystone walling [the castle, not Ireland, obviously] with 3 defensive towers in rather good condition from our experience so far.

Ali enjoys working out what went where & what is a newer addition or patch-up – I don’t get it so I nod gently and say ‘yep’ at what I think are the right times. I bugged him today about the castle definition which is, I think, what I bring to the trip – abstract thought.

Leaving Dunlough we followed my uncle’s directions to Kanturk Castle. The scenery was of another world, the driving was from another planet! 2 different cars seemed to want me dead, but fortune/Ali’s observation/my reflexive reactions kept us alive (Ali later had 2 more attempts on our lives, so it’s not just me).

The route took 2 and a half hours and took us to a castle strongly recommended. It was never finished, never functional & 300 years out of our date range – I was tired and not impressed! Very quickly we left + headed North to Limerick, now too late to see King John’s Castle there, we thought we’d go straight to the hostel in Ennis.

Between Limerick and Ennis are two castles that we thought we’d stop off and see, to make up for Dunlough [I would have been very tired writing this, I mean to make up for Kanturk Castle]. One was now a golf course (great!) and the other was, you guessed it, out of our date range! Annoyed and despondent we went off to Ennis to drink away our sorrows. But, to make matters worse, it appears that Ennis is the only town in the whole of Ireland the doesn’t sell Real Ale!!! After only 2 pints we have called it a night, maybe I can catch up on some sleep lost last night?

I try not to think of Carly too much at the moment as it hurts to be away. We do everything together and share all life’s experiences as a team, so this is indeed very peculiar and very hard.

– N.B. A lesson learnt last night [at my Aunt and Uncle’s] – when you speak with the Irish about early Norman castles, they will quickly start discussing Tudor & Cromwellian massacres that aren’t relevant in the slightest. This shows the issue we are up against. 500 years of history is banded together as if it were a decade apart. I suppose unhealed wounds ignore or transcend the principles of time and chronology.”